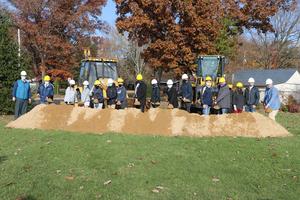 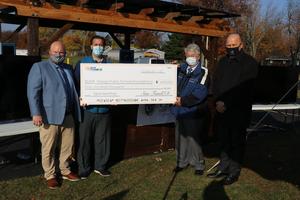 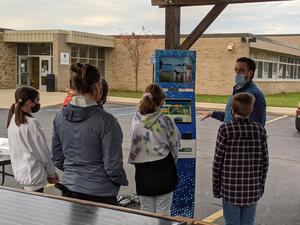 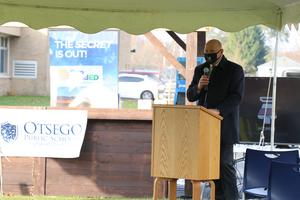 Otsego Public Schools officially broke ground on a new partnership with Sun FundED, an education services company out of Indiana, to bring solar energy and enhanced solar education opportunities to our district. “It’s a great day to be a bulldog,” said Otsego Superintendent Jeff Haase as he welcomed a crowd of city and school leaders, local legislators, students and Sun FundED representatives to the groundbreaking ceremony to bring solar to OPS. “With an investment of $1, today we’re going to benefit with a savings of $5.3 million for the life of this agreement. In addition, Sun FundED will be making an investment of $2.4 million into the infrastructure for this project,” Haase explained.


This is a unique partnership that focuses as much on education for our students as solar energy and savings for the district. The groundbreaking unveiled a look at the SAMI experience, which will be a stand-alone solar array completely for educational purposes. “We will provide a hands-on solar classroom that will go between the middle school and high school; a 30x30 outdoor area, powered by solar, to be used by our classrooms,” Haase said. SAMI stands for Sustainable, Academics, Marketplace and Innovation. Today’s presentation was all powered by solar through the SAMI Experience exhibit.


Sun FundED Co-founders, Kelly Hipskind and Patrick Poer spoke to the crowd about this partnership as more than a solar agreement, but as new residents of Otsego, invested in this community and district for the next 25 years. While they provide the solar array infrastructure, their focus is also education. Their partnership in Otsego Public Schools was strengthened by a matching mission, “You guys have really been trailblazers,” Hipskind said about OPS at the event, “The tone, the heartbeat and the words that have been used along the way, were always about putting students first. I’m honored to be here.”


This agreement, as Supt. Haase pointed out, has been in the works for about a year and a half. But this initiative, and the OPS commitment to energy efficiency started more than a decade ago. It was 13 years ago that Otsego Public Schools adopted an energy program that has resulted in a cost avoidance of $3.2 million to date. Otsego stands to save millions more in this agreement. “With an investment of $1, today we’re going to benefit with a savings of $5.3 million for the life of this agreement,” Haase said of the projected energy and utility savings of going solar. For the infrastructure, Sun FundED will be making an investment of $2.4 million into the infrastructure for this project. “In addition, OPS will be able to sell electricity back to the grid when we don't use it. Those savings will come right to the district,” Haase added.


About two years ago, three STREAM School students researched solar energy for OPS at the same time that OPS was researching solar companies with which to partner. These three students joined the ceremony today to move dirt as their presentation years ago, nearly matched the exact savings the district will see. Board Secretary, Scot Reitenour, spoke of that presentation at the event at the new venture for Otsego. “This is another opportunity for Otsego to be a leader in innovation. Those funds that would have gone to utilities, we can now push those in other areas and district expenses,” he said.


To top off an already exciting announcement, Sun FundED revealed an advancement check for the district of $400,000 to be used to invest into student scholarships for students who might be thinking about pursuing post-secondary education in renewable and sustainable energy or STEM.


Installation of fencing and solar arrays are scheduled to begin in November and completed in late spring.