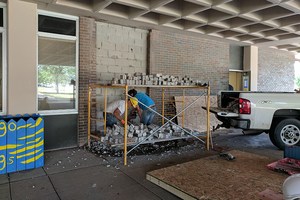 Each of our buildings has a new look as you enter the offices thanks to a restructuring of entryways to make them safer and more secure for our students and staff.
Year 1 of the Building and Site Sinking Fund projects is well underway!
The week after school let out, the work began to reconstruct the entryways at each of our school buildings to create a more secure entrance. As you enter each building this new school year, you'll go into a secure vestibule and get buzzed directly into the main office to be helped.

Voters passed the Building & Site Sinking Fund millage in March of 2016. Because it was a sinking fund, projects are completed as the money is collected. With the winter tax revenue, Otsego received the funds necessary to get started on the Year 1 projects which is primarily on student/staff safety in creating the secure entrances.

All work is slated to be completed by the start of school (which is Tuesday, September, 5th.) You can stay up on the work taking place by checking out the photo album on Facebook.

In addition to the building entrances, the tennis courts were resurfaced, new windows were installed in two classrooms at Washington Street Elementary and pneumatic controls will be replaced at WSE, as well.

We, once again, want to thank Otsego school district voters for supporting this fund and our students!