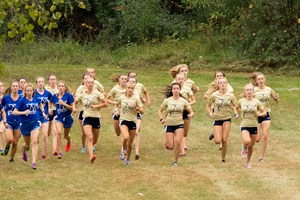 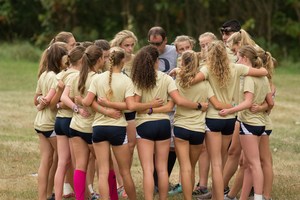 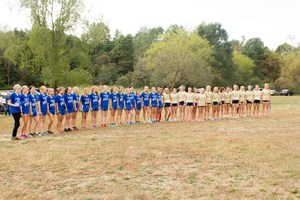 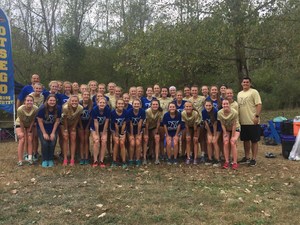 A very special graduate who unexpectedly died this summer was honored in a special way this week by Otsego’s biggest rival and closest ally. Plainwell’s XC team dedicated the meet with Otsego to Delaney Bush.

The day before the Plainwell meet, Otsego’s girls’ cross country team was surprised with an incredible gesture. Plainwell’s girls’ team had purchased special shirts for both girls’ teams to wear that honored Delaney Bush, a 2016 Otsego graduate who passed away this summer unexpectedly; a graduate who was a friend and mentor to so many. She was a co-captain on the cross country team during high school.

“It was so cool,” says senior Gracie VerHage of the tribute.

With Plainwell in blue, and Otsego in gold, the girls all held hands as Plainwell Coach Brett Beier said a few words prior to the meet. “Delaney Bush was a very special girl. She not only touched the hearts of everybody from Otsego but people from around the conference and in the area and on my (girls) team especially.” He said the girls wanted to honor her by wearing special jerseys.

They all bowed their heads for a moment of silence for Delaney. Despite the rivalry, the two towns are always there to support one another, and these girls are friends outside of the competition, “We’re close,” Brylowski says. Otsego presented Plainwell’s team with flowers a couple of years ago after their coach, Glenn Beier, passed away, and made that meet a special one.

Glenn was Brett’s dad, “So many girls on my team had direct contact with Delaney, whether it was at church, cross country or dance, I knew that we had to honor her like Otsego honored my dad,” Brett says. The Plainwell cross country girls were on a team trip when they heard the news about Delaney. “One of our girls got a text and nobody could believe it,” he recalls. While he didn’t know her personally, Beier says her impact was obvious, “Her smile was infectious and even without talking to her you knew she was the kind of person that kids - and adults - should be trying to emulate.” He thought of the shirts a couple days later and the girls loved the idea. A friend of his, and an OHS alum, came up with the design that intertwines running with dancing.

Both Brylowski and VerHage were close with Delaney, as were most girls on the team. She gave them rides and was a friend and mentor, “She was like a big sister, she took me everywhere.” VerHage says and reminisced about their friendship, “She was magical,” she says. She adds that the tribute came at a great time. “It fit because Plainwell’s course is so difficult so it was like Delaney carried us up all those hills.”

Delaney’s family was also at the meet last night to be a part of the tribute.

Photos are courtesy of Joy Livingston, “Simply Photos by Joy”